June 1, 2009 In an Absolut World No Destination Is Impossible

Pernod Ricard Travel Retail is launching a global marketing campaign this month entitled In an Absolut World No Destination Is Impossible to “celebrate the global traveller in space and mind”. According to the drinks company, the campaign is aimed at the contemporary global business and leisure traveller who values the trip as a means of expanding perspectives geographically, mentally and intellectually.

In a statement, the company said: “This campaign is created for longevity and will introduce the global traveller to a series of ideal destinations, the only boundaries for which are those of imagination. The first of these is The Eternal Sunset Coast, an ideal destination where the most romantic and poetic moment of the day lasts eternally.”

The campaign, which is being launched initially at Singapore Changi, London Heathrow and Frankfurt airports, is the first to use In an Absolut World as a marketing platform.

With reference to the aforementioned travel guide gift, the campaign is being run in collaboration with Monocle, a global affairs magazine created by Editor in Chief, Tyler Brûlé. This is a special In An ABSOLUT World travel guide with 12 selected features identifying the magazine’s ideal destination. 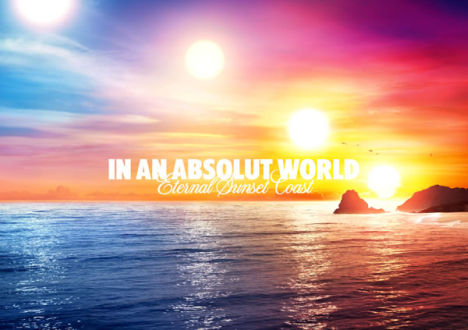 “As a special bonus to our ultimate travel guide we have compiled our favourite features from our most loved destinations and asked Satoshi Hashimoto - one of our favourite illustrators - to render the elements we’d like to see punctuate a perfect destination IN AN ABSOLUT WORLD,” said Editor in Chief Tyler Brûlé in his foreword.

The Absolut Company global travel-retail director Anders Olsson said: “Our market is all about travelling, physically and mentally, so we are excited about introducing a campaign concept that adds new dimensions to the art of voyaging, with the traveller in the role of the hero.”