The image of a fan moving into the Green Monster will be displayed in magazines and newspapers, spread across billboards and sounded out on radio spots as part of a hyper-local marketing campaign.

The Green Monster ad aims to connect with vodka fans just before baseball’s playoffs get under way.

The New England market is an especially important one for distillers, Murphy said. In the Northeast, vodka consumption is among the highest in the nation. (source) 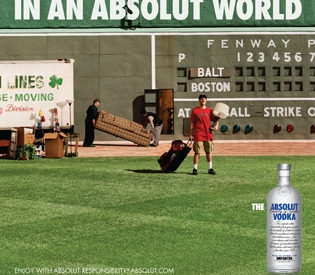