Everything started with the ABSOLUT HERITAGE campaign back in January 2004. It was just a small try to change the style of Absolut ads. And I have to say that these ads are not so bad (boring) as I thought in those days when you compare them to the latest ads produced since 2006. 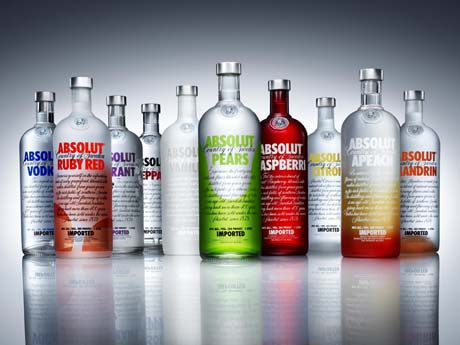 Absolut Vodka was very well known for their clever ads where you have to smile when you see them and see those hidden stories in the background. But now everything is gone… Someone said it’s time for a change. When ABSOLUT RASPBERRI flavor came with the “street-style” ads in 2004 it was surprising that since that we had just about 6 different Absolut Raspberri ads (and their modifications). In every magazine we were able to see still the same ads, nothing new. ABSOLUT APEACH came in 2005. Since that we saw just 2 (!) different ads for Apeach. ABSOLUT RUBY RED launched in January 2006 came with just 3 ads where I didn’t see this Absolut Revelation ad at all.

All the flavor ads were interesting but it was something different we were used to. Together with that all the classic ads like “bottle focused ads” are not used in the USA anymore. Instead of that we can see artistic ads like FIND YOUR FLAVOR series and series of boring ads without any idea like this one, this one or this one.

Fortunately in Europe there can be still found some interesting ads with idea. I know that German series ABSOLUT CITY ATTACK was just recyclation of old ads but who cares. And of course sometimes there is something completely new like ABSOLUT THESSALONIKI.

Reason I write this article is the fact that I don’t like to see what’s happening and that all the Absolut Collectors community is disappearing. You can see it on eBay (for example) where few years back almost all Absolut ads found buyers. Right now there are almost no sales (although you can find some very rare ads there). And of course I can see it when I am talking with other collectors. Lots of them ended with collecting ads or planning to end. Some of them are still collecting because they don’t want to make the final decision. It is quite sad to see that…

Who knows… maybe the new style of ads attracts more new customers to the Absolut brand. Maybe it works to sell more bottles and that’s what it is all about. But…

I am not ending to collect Absolut ads… I will still inform about what is new in the Absolut Vodka world but I hate the situation which is last few years and I wanted to say that. What is your opinion? Did you stop to collect ads already? Do you think it is the time to stop now? Do you like the latest ads?